View from the Helm Salish campers had the chance to design, build and deploy data buoys

A large bucket of PVC pieces and parts is noisily spilled at the feet of the circle of Salish Sea Expeditions Science Campers.  In a flash, campers are reflecting on buoy design, flotation, sensor positions, line length, anchoring, tidal change, depth of deployment… and in their eyes you can see: “oh, this is going to be fun!”

Leading up to that moment, there were conversations about why build and deploy buoys? How will the minus tide this week affect our deployment? How can the sensor positions provide the “coolest” information? END_OF_DOCUMENT_TOKEN_TO_BE_REPLACED First Mate Michael Sharp took on the role of Captain during a recent trip.

Here at Salish, it’s hard to choose which is more fun: the sailing or the science. Showing kids that they can excel at BOTH is when we get really excited. Our crew of fantastic educators is the foundation upon which our program is built, and they are exceptional in delivering programs that highlight both science and sailing with enthusiasm.

This spring, our crew was a mix of veteran Salish educators and new members that added depth and breadth to our program. They handled tricky weather with true professionalism and safety-minded creativity. We owe them all a big THANK YOU for being awesome. END_OF_DOCUMENT_TOKEN_TO_BE_REPLACED It’s been another great season of hands-on learning and science exploration on the Salish Sea. Eighteen schools and nearly 500 students participated in Salish Sea Expeditions’ SOUND Programs this season from mid-March to early June. There were 65 program days which ranged from single day trips, to extended 3-5 day adventures.

Although the weather threw us some curveballs this spring, it didn’t dampen the spirits of our student scientists, who had the chance to explore some pretty cool science questions while aboard the Good Ship Carlyn. Some of these research projects included comparing presence of plankton with the presence of copper, and water pH compared to plankton abundance.

You can read more about our spring expeditions by visiting the Ship’s Log section of our website.
END_OF_DOCUMENT_TOKEN_TO_BE_REPLACED

“Thar She Blows!” Wind and Whales on Spring Programs 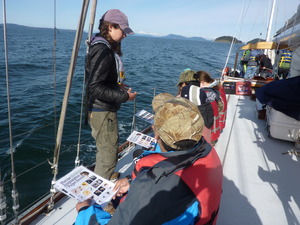 Teaching about plankton on S/V Carlyn

The 2017 Spring season has been blown around a bit so far, but it’s not put a damper on the fun science and maritime skills our students are learning while aboard the S/V Carlyn.

One of our students shared that he couldn’t wait to “teach this lesson to my Dad!” and another group chose to extend their marine science lessons after dinner ashore rather than take a break with some field games.

Our season began in mid-March out of Elliott Bay Marina with a day program for Seattle MESA students. Windy, rainy weather marked the first several weeks of programs, but spirits remained high.
END_OF_DOCUMENT_TOKEN_TO_BE_REPLACED

Learning Spotlight: What’s In a Sail? 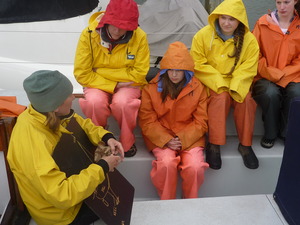 A lesson on parts of the sail

Students aboard the Carlyn explore marine science unlike any classroom experience: they formulate a science question, decide how to test their hypothesis and then collect data throughout the course of their Salish program. It’s an amazing learning process to observe!

Carlyn also affords us the opportunity to teach kids about sailing, another area of learning that is new for many of our participants. END_OF_DOCUMENT_TOKEN_TO_BE_REPLACED 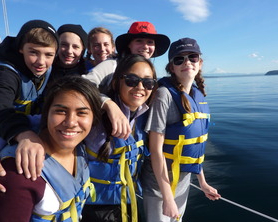 Salish Sea Expeditions is honored to have been chosen to receive “No Child Left Inside” funding through the Washington State Recreation and Conservation Office in 2016. Our organization was one of 19 that received funding out of 122 applicants. These grants are made available contingent on matching funds to organizations throughout the state whose mission is to get our kids outside and connected with our natural world.

We encourage our Washington state representatives to continue funding this important program that connects kids to the outdoors, in a region with so much to offer in the way of spectacular state and national parks, ecologically important wildlands, and (especially near to our hearts) our unique marine environment.
END_OF_DOCUMENT_TOKEN_TO_BE_REPLACED

What a Year for Hands-On Learning: 2016 in Review 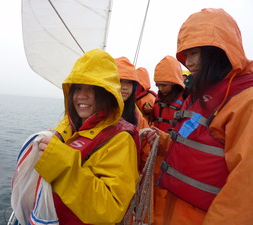 Science in the Rain… Still Smiling!

What a busy and fulfilling year it’s been! Our first program of 2016 kicked off in March with weather that roared in like a lion, but settled into lovely, lamb-like sunshine and gentle breezes — the perfect combination of environmental conditions to keep the crew on their feet! We had an enthusiastic group of educators who led programs through June, serving 26 groups of students with 58 days on the water. Our students generated some interesting hypotheses to test, which included the examination of the presence of copper and plankton, the relationship between silica and zooplankton abundance, and development density and it’s relationship to water turbidity. It was fun seeing our young student scientists present their findings at our annual Salish Student Science Symposium at the end of the season (you can read a wrap on that here).  END_OF_DOCUMENT_TOKEN_TO_BE_REPLACED

Patrons of Discovery Breakfast: Working Together for Future Scientists and Mariners

On September 30, more than 150 individuals and 25 industry partners joined us to help raise up future scientists and mariners by sharing breakfast and contributing to the future of marine science and maritime education in our region. Through the generosity of our awesome community, we raised more than $46,000, which will be used to directly support our upcoming programs and provide scholarship funding. Thank YOU for being a part of that effort! END_OF_DOCUMENT_TOKEN_TO_BE_REPLACED The intersection between marine resource management, thoughtful stewardship and informed policy-making is such a critical one for our region and for the future of the Salish Sea. Salish student scientists study the effects of human impacts on marine life, and learn about the resulting systemic changes to the marine ecosystem such as ocean acidification, which poses a significant threat to shellfish. END_OF_DOCUMENT_TOKEN_TO_BE_REPLACED Salish Summer Camp is a dynamic blend of traditional Salish Sea Expeditions investigation of the marine waters, but with more exploratory activities within the watershed.  The overall aim of the camp was to allow campers the opportunity to explore broader connections between the watershed and the marine environment. END_OF_DOCUMENT_TOKEN_TO_BE_REPLACED